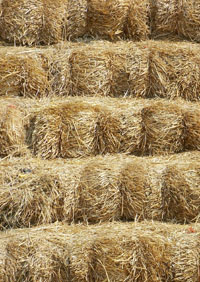 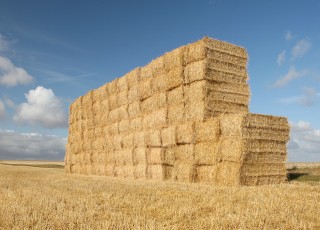 Why cows will not want to eat your house

Straw is the by-product of farming and makes up 50% of the yield of cereal crops like barley, rye, oats rice and wheat. It contains no nutritional value for animals (not to be confused with hay with is used as animal feed) and is generally utilized for animal bedding or burned as a biofuel, especially for biobutanol. Straw briquettes are used as a biofuel substitute to coal. When it is harvested, the straw is tightly packed into bales and secured with string. These bales are used to construct relatively cheap, well-insulated environmentally-friendly walls.

Bales come in different sizes, but the most commonly used bales are about 36 inches-by-18 inches-by-14 inches. Bales must be dry and tightly packed. Damp straw can result in mold or compromise the integrity of the structure. The bales are stacked into a frame much the same way as you would bricks. Laying the bales horizontally will produce an 18 inch thick wall while vertically stacked bales will produce a 14 inch wall. Once the wall has been completed, it’s rendered and sealed with plaster, earthen stucco or lime stucco. The wall must be properly sealed.

The benefits of straw bale construction

Thanks to the carbon trapped in the straw itself, bale-constructed walls can be carbon-neutral or even carbon-negative if the straw is locally sourced. When the structure is demolished, the straw can be broken up and will biodegrade. Although loose straw is extremely flammable, once the bales are rendered, they are surprisingly resilient to both fire and wind. The BaleHaus, a two-storey structure built by Bath University, has been subjected to rigorous testing to clarify it’s safely. The fire test subjected the building to 1000°C temperatures for two hours, four times longer than the legal requirements, without it igniting.
Research shows that straw bale homes have a fantastic R-value of between R-30 and R-40 which further reduces the structure’s carbon footprint by negating the need for heating (and cooling if built right) in all but the most extreme temperatures.

What kind of structures can you build?

Straw bale structures are gaining traction and, as building methods improve, height. A five-star lodge in South Africa was constructed from 10 000 straw bales and has housed the likes of Nelson Mandela and Tony Blair. The Maya Guesthouse, a three-storey hotel in the Swiss Alps, in the little village of Nax Mont-Noble, is currently being constructed and has the claim to fame of being the first hotel in Europe built entirely from straw. 34 Straw bale homes were built in Atlanta Canada; a project conducted by the Canada Housing and Mortgage Corporation. Atlanta has extreme changes in weather and the project measured the way in which the straw bale homes withstood the elements.

Although lacking the strength and durability of green building materials such as ICF blocks, straw bale homes provide a natural, environmentally alternative to conventional building methods. Before considering a straw bale structure, you must investigate the licensing and building code options in your area. Good construction is crucial and the structure will only work well if it is properly built. 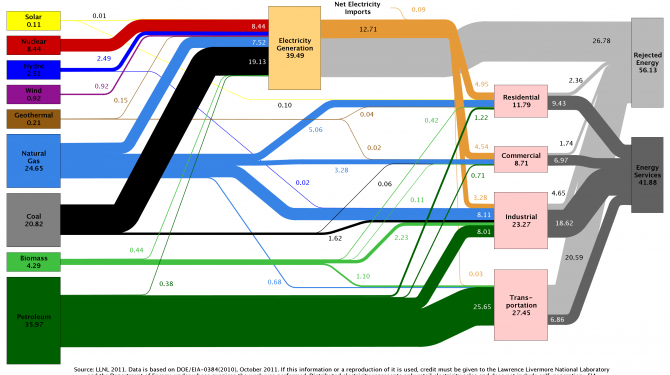 Winterize your Home in 3 Easy Steps